Obviously I brought this back to running 😉 Let’s pretend what we’re seeking, instead of enlightenment, is a goal race or time. That’s fine – sometimes we have one and sometimes we don’t. But the point is, don’t expect anything to fundamentally change in you or what you do once you reach your goal. We’re not striving now so we can rest later. We’re doing what we love to do and if we get a great race time in the process, fantastic. It won’t change what we’re doing though. Now is a perfect time to find out how you love to run, without an external race goal influencing you.

I’m reminded of the summer of 1996 when I was 21 and living in a tent and working in a bookstore in Dawson City, Yukon. I ran pretty much every day and loved it so much. I could run at 10 or 11pm along remote northern highways and have as much sunlight as if I was running at 10 or 11am. I basically had two route options: one along the Top of the World Highway towards Alaska, and another 7km straight up a hill called The Midnight Dome. I’d alternate between these two routes and never got bored. I remember really falling in love with running there – there were no gps watches or strava or cell phones or even the internet – running was a very solitary and personal endeavour. On my runs up the Dome I had to stop often to rest my legs and catch my breath. I made it a personal goal to run all the way to the top without stopping by the end of the summer. I remember the joy and sense of achievement I felt when I first did it. I was so happy. There was not a soul to tell but it didn’t matter. I stopped at the top, took it all in, and jogged the 7km back to my tent. 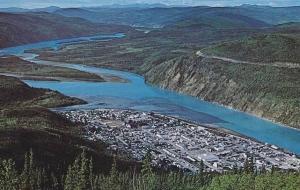 View of Dawson City from the top of the Midnight Dome

Well, as fate would have it, I discovered that a few weeks after my first ascent they were holding the annual Midnight Dome Race. Runners came in from all around (well, mostly Whitehorse) to see who could make it to the top first. I quietly realized that I had been inadvertently “training” for this race for a couple of months. So I paid my $15 and entered the race. Imagine my surprise when about 2/3 of the way up a car with a CBC reporter from Whitehorse leaned out with a microphone to tell me I had a huge lead and how did it feel to be the likely women’s winner. I don’t think I said much since I was gasping for air, but I did make it to the top first. I won a meal in a restaurant, a night in a hotel and tickets to Diamond Tooth Gerty’s cabaret – all expensive tourist things which were huge luxuries for the “dirty hippies across the river”. I remember my main takeaway being that the race was a funny lark and a totally random coincidence. My hippie tent friends who saw me running all the time (and rarely showering) laughed about it with me. It was like we’d pulled one over on “the man” – winning the prizes for a race I didn’t really care about. That hadn’t been why I was trying to run up the Dome. And I don’t remember the experiences of the prizes as much as the feeling of when I first made it up without stopping. I also continued to run up the Dome (on tougher days still stopping the odd time) – and still relished the challenge and accomplishment every time.

Are we having fun yet? Finding a cheerleader
Scroll to top