I have a very vivid memory from early motherhood etched in my brain. My son Hugo was under two-years old and we were flying from Halifax to Toronto together (my husband was driving). I remember Hugo’s age specifically because if your child was under two you didn’t have to purchase a separate seat as they were still considered to be small enough to fit on your lap. I was also about 7 months pregnant with my daughter, so there were essentially three of us sharing one small airplane seat. And when you’re almost two, you wear hard-soled running shoes and you don’t like to sit in one spot, so it was a physically uncomfortable and demanding situation for all of us.

But what I remember so vividly is a moment just before we’d taken off. Hugo had been excited about the airplane experience and loved the big jets and wings and the fact that he was inside of one of these machines. However that excitement quickly faded after about 5 minutes of being forced to sit on my lap in a boring seat. I had used up all of my snacks, games, books, colouring and toys within the first 10 minutes – again, before we had even taken off. As we were still taxiing on the runway, lining up for our turn to take-off, Hugo stood on my lap, pressed his face against the window of the plane and declared: “All done! Hugo all done airplane!”

I love how very young kids can assess a situation and declare the facts so clearly. He wasn’t asking or pleading or bargaining – he didn’t know how to do any of those things yet. He was just making a firm statement about his situation. He was over it. And of course the sad part was we then both had to deal with another two and a half hours in the airplane which he was thoroughly done with. 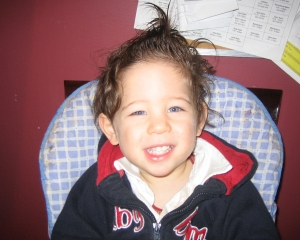 April, 2009. Almost 2 and pretty sure he knows what he wants but no idea how to go about getting it.

And this is exactly how I feel about winter right now. At first I got into it and even loved it. We celebrated the first snowfall, we’ve enjoyed lots of skiing, skating and tobogganing, appreciated cozy evenings around a fire, and I’ve even had many beautiful, enjoyable runs in the snow and cold. But now, by the end of February, the list of negatives has tipped the scales. I’ve joined many of my running buddies in the “winter wipe-out club”. I’m experiencing the lower leg niggles that you get from too much mileage on slushy, slippery surfaces. I’ve relegated yet another tempo run to the treadmill so I can hit paces.  All of my running shoes are stiff and salt-encrusted with laces which refuse to bend. My outdoor runs contain countless full-stops to either get around other people navigating the same single track of sidewalk, avoid giant ice puddles or hurdle snowbanks.

At this point I can officially say, “All done! Seanna all done Winter!”

But unfortunately, much like the airplane situation, I don’t think winter is done with me yet. 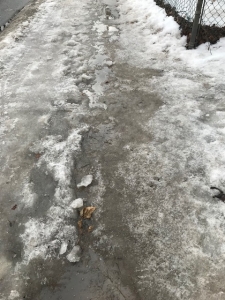 Current view of the sidewalk outside my door. Sigh…